No reviews
Customer reviews
35.00 €(37.90 US$)
New
Limited quantity
Description
An immunity-boosting mushroom, referred to as the ‘elixir of long life’ in ancient Greece

Price summary
Total price of the offer
114.00 €
Add to basket 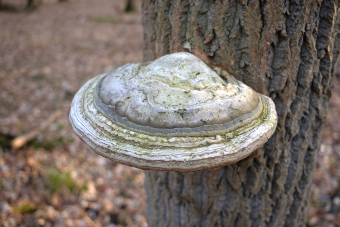 Agarikon 50% Polysaccharides is a supplement containing larch polypore (agarikon or white agaric). Used for thousands of years, and in many parts of the world, this mushroom was described in the 1st century AD as the ‘elixir of long life‘ by the Greek physician Dioscorides for its positive effect on the immune defences and respiratory system.

As its name indicates, Agarikon 50% Polysaccharides is standardised to 50% polysaccharides in order to deliver maximum health benefits. It is listed under our Immunity category.

What is the agarikon mushroom (Laricifomes officinalis) or white agaric?

Agarikon, also known as larch polypore or white agaric (its scientific names are Laricifomes officinalis, Fomitopsis officinalis or Agaricum officinalis), is a mushroom from the Fomitopsidaceae family. It grows on decaying wood on larch trees and other conifers native to Europe, Morocco, Asia and North America.

Agarikon is shaped like a wide column or large hoof. It can weigh as much as 10kg and survive for up to 75 years. Soft and yellowy-white to start with, the mushroom then becomes hard and chalky before its flesh splits, and it takes on grey, brown or red hues.

Agarikon has been used for thousands of years to produce textiles, ritual masks, medicinal potions (1)... The Tlingit, Haida and other indigenous peoples of North America called it the ‘bread of ghosts’. They even believed that a certain Mushroom-Man – half-human, half-polypore – played a key role in the emergence of mankind. In Europe, larch polypore was traditionally used as a tonic to support the body’s natural defences, to treat lung disorders, and as a purgative and antiperspirant for soothing TB-related fevers (2-3), etc. In 19th century India, it was recommended for relieving spasmodic coughs (4).

What benefits are offered by Agarikon 50% Polysaccharides?

Agarikon is nutritionally very rich, and extremely good for the body. This agarikon extract thus contains:

Agarikon 50% Polysaccharides is standardised to 50% polysaccharides allowing you to gain maximum benefit from the mushroom’s most powerful substances.

In addition, this supplement is made exclusively from extract of mycelium, the network of fungal filaments specific to mushrooms. This is the most digestible and absorbable part of larch polypore.

As you can see, agarikon is not just any mushroom: it is referred to in the Vienna Codex (dating from 542 AD), one of the oldest examples of Discorides’ medical manual, used for a long time in hospitals. Although mushrooms were often excluded from modern Western medicine, Laricifomes officinalis still appears in Feldman’s 'Formulaire pratique de pharmacologie' (1978). It is known as the ‘pharmacists’ agaric’ and remains part of the Croatian pharmacopeia as an antimicrobial (13-15), and is even being used in dermocosmetics for its anti-wrinkle benefits (16).

If you’re keen to boost your immunity naturally, adopt the following everyday measures:

Mushrooms are a genuine natural treasure - nutritionally, gastronomically, ecologically, and medically. Yet this fantastic resource remains, for the most part, poorly understood and under-explored.

We do know that many of them promote good immunity, act against bacteria, viruses and tumours, have anti-inflammatory effects, help to regulate cholesterol levels, etc. Indeed, they are widely used to prevent and treat health problems in Asian countries.

Paul Stamets, a renowned American mycologist, is exploring the many roles mushrooms may play in the future, and especially the therapeutic properties of their mycelium. He’s responsible for a great many clinical studies on the subject. A strong advocate for biodiversity, Paul Stamets campaigns, in particular, for the preservation of ancient forests which he describes as a “veritable mushroom reservoir […] which could prevent pandemics – now and in the future”. He regularly promotes the preventive and therapeutic use of agarikon (24).

Alongside your course of white agaric, consider taking shiitake (Lentinus edodes), another immunostimulant mushroom. But instead of taking a powder or ordinary shiitake extract, try AHCC®, an excellent polysaccharide made from the mushroom’s mycelium (25). Developed in Sapporo in Japan by the famous laboratory Amino Up Chemical Co., the shiitake supplement AHCC is standardised to 10% alpha-glucans and is easily absorbed by the body.

Another natural product, colostrum, or liquid gold, is the first form of mother’s milk that female mammals produce for their new-borns. Its nutritional virtues are exceptional: bovine colostrum is rich in fatty acids, vitamins, zinc (good for the immune system) and above all, IgG immunoglobulins (26). So to boost your immunity, combine your agarikon supplementation with colostrum capsules standardised to 30% IgG immunoglobulins.

Last but not least, if you want to look after your respiratory health, choose an extract of maritime pine bark and curcuminoids (27-28). You’ll find both in the tailor-made synergistic formulation Lung Detox, which is also rich in anti-inflammatory quercetin, sinus-protecting bromelain and antioxidant EGCg.

Lung Detox
Essential formulation to aid respiration and detoxification of the lungs
33.00 €(35.73 US$)