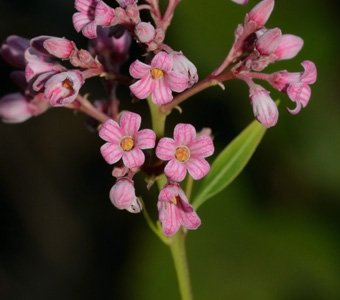 Posinol™ is a patented extract of the leaves of Apocynum venetum that contains a minimum of 4% glycoside flavonols (isoquercitrin and hyperoside).

What are the benefits associated to Posinol™?

Today's increasingly fast pace of life, together with family and work pressures, can upset emotional equilibrium over time and manifest as anxiety and depression. To address these emotional dips, we all too often turn to drugs - which have medium and long-term side-effects - when natural phytotherapeutic solutions are available that are just as effective. St John's Wort, the active substance of which is hyperforin, is one solution often used in such cases. However, it has a number of disadvantages - in particular, it interacts with oral contraceptives, blood thinners and hypotensive drugs, lowering their efficacy.

Researchers have therefore become interested in a wild medicinal plant from Asia, Apocynum venetum (Luobuma), which has been used for more than 600 years in traditional Chinese medicine. An extract is obtained from its leaves which contains no hyperforin but is particularly rich in glycoside flavonols: rutin, astragulin, quercetin, kaempferol, and especially isoquercitrin and hyperoside:

According to a meta-analysis in 2012, Apocynum venetum extract has therapeutic potential in the prevention and treatment of cardiovascular and neurological diseases, particularly hypertension, hypercholesterolaemia, neurasthenia, depression and anxiety. Animal studies and clinical trials conducted to date show this patented extract to be completely safe and free from side-effects, even when taken for more than three consecutive years. For optimal efficacy, the recommended daily dose is two capsules, spread over the day.