Price summary
Total price of the offer
80.00 €
Add to basket 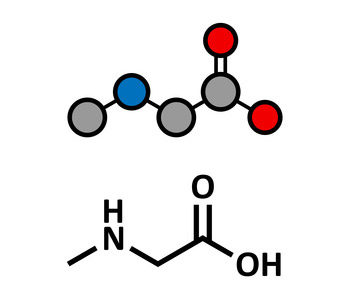 Sarcosine is a dietary supplement containing sarcosine, an N-methylated derivative of the amino acid glycine, which is generating much optimism within the scientific community.

What exactly is sarcosine?

Sarcosine (N-methylglycine) is the N-methylated derivative of the amino acid glycine. Like dimethylglycine (DMG) and trimethylglycine (TMG), it is formed from choline and methionine. It is found in egg york, turkey, ham, vegetables and legumes. It was named by the German chemist Justus Von Liebig who was the first to isolate it in the mid-19th century.

In the body, sarcosine is naturally present in muscles and various tissues via the enzyme glycine dehydrogenase. It is formed from choline intake and the metabolism of methionine, and then rapidly broken down into glycine which forms part of the composition of proteins and cell components such as creatine, purines and serine.

Sarcosine is present in the blood at serum concentrations of 1.4 µmol/l (1).

How does sarcosine work?

Sarcosine is a competitive inhibitor of type 1 glycine transporters (2), an agonist of glycine receptors (3), and most importantly, a co-agonist of NMDA (N-methyl-d-aspartate) receptors (4).

It is this mechanism which is arousing the most interest among the scientific community and which has generated a number of studies over the last few years (5-9).

Are there any side-effects from taking sarcosine?

Studies show that sarcosine is remarkably well tolerated and does not produce any side-effects (10). However, regular supplementation is not recommended for those taking antidepressants, especially serotonergic drugs.

How should sarcosine be taken?

The recommended dose is between 1.5g and 3g a day, which is 3 to 6 capsules, ideally taken in two separate doses.

For enhanced effects, we’d also recommend following the steps below throughout the supplementation period:

Composition
Directions for use
adults. Take 3 to 6 capules a day.
Each capsule contains 500 mg of sarcosine.

The quality seems to have become of much lesser quality.
Also Supersmart should work on better customer service and communication.
VOORWINDEN Pc 2021-10-12

Overpriced and somewhat deceptively marketed, but at least I can get it here.
Sam 2021-03-14

Iron Bisglycinate
A highly bioavailable and well-tolerated form of iron
16.00 €(17.40 US$)