17 reviews
Customer reviews
19.00 €(19.50 US$) in stock
Description
A zinc supplement in its most bioavailable form
Certificate of Analysis 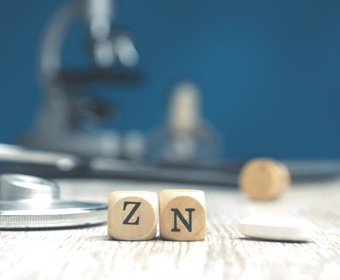 Zinc Orotate 50 mg is a supplement containing the orotate form of zinc, an essential trace-element, but one in which many people are deficient.

Because the zinc in this supplement is in its optimal form, it maximises the main effects of this trace-element: to stimulate the immune system, support the healing process and reduce the risk of fatigue.

What role does zinc play in the body?

Involved in more than 200 enzymatic reactions, zinc is an element the body needs in order to function properly. By trapping free radicals and stimulating production of antioxidant proteins in cells called metalloproteins, zinc helps to reduce oxidative stress.

It also plays a part in:

In short, without zinc, nothing in the body is able to function properly: the slightest shortfall can have clinically significant consequences, of which these are the two warning signs:

Where is zinc found in the diet?

Most meats and nuts contain good levels of zinc, and it is also found in some other foods:

The body only absorbs 15%-40% of the zinc present in food, and this figure also declines with age.

What benefits are offered by the orotate form of zinc?

Studies (3-4) have shown that some supplements are relatively ineffective because of the form of zinc they contain, or the sweetener used to mask the metallic taste (citric acid, tartaric acid or glycine).

What’s more, minerals need to be bound to specific amino acids in the gut in order to be properly absorbed. This is a natural process which is essential if the zinc is to successfully cross the intestinal barrier and enter the bloodstream.

The orotate form offered by SuperSmart negates the need for this complex and uneven stage by pre-binding the zinc to an organic substance. The zinc is thus directly absorbable: rather than being presented to the body as a piece of indigestible metal, it is instead an ‘absorption-ready’ nutrient.

The result is spectacular: a massive increase in the rate at which the zinc is absorbed. What’s more, this orotate form meets all the following quality criteria:

Which individuals are at risk of a lack of zinc?

Though our bodies need very little zinc, intake of this trace-element is nonetheless essential.

As a result of changes in our eating habits, advanced farming techniques, impoverished soil and the almost inevitable refinement of cereals, mild deficiencies are common among modern societies.

This is particularly so among the following populations:

How should Zinc Orotate be taken?

It is advisable to leave at least a two-hour gap between supplementing with Zinc Orotate and taking antacids, antibiotics and tetracyclines.

For optimal absorption, it’s also best to take zinc on an empty stomach, and not with a meal.

Generally speaking, deficiency in zinc is associated with deficiency in selenium. These two antioxidant trace-elements help to trap free radicals and as such, are potentially important anti-ageing substances. In cases of weak immunity, Zinc Orotate can be combined with the product Green Propolis, a supplement containing green propolis.

Many factors influence how well our immune systems respond to daily attacks: sleep quality, exposure to stress, physical fitness, and above all, diet. Throughout the period of zinc supplementation, we’d recommend also following these 10 steps to avoid falling ill over winter.

What’s the latest news on zinc?

Zinc may help to fight infections by preventing excess inflammation(9). Though this was discovered in 2013, it remains relevant for the 2 billion people across the world affected by a lack of zinc.

Lack of zinc may also play a role in the development of hypertension (10). A study published in 2019 suggested that low zinc levels may contribute to high blood pressure by altering kidney function. Type 2 diabetics are mentioned in this study as being at higher risk of zinc deficiency.

Each vegetarian capsule contains 50 mg zinc orotate.
Directions for use

Take one to two vegetarian capsules a day, or as advised by your therapist.

Subscribe to our newsletter
and obtain a 5% permanent discount
Our selection of articles
Dietary supplements: what’s the best time of day to take them?

Which foods will we all be eating in 2050 and beyond? Discover how the culinary landscape is likely to change in the decades to come.