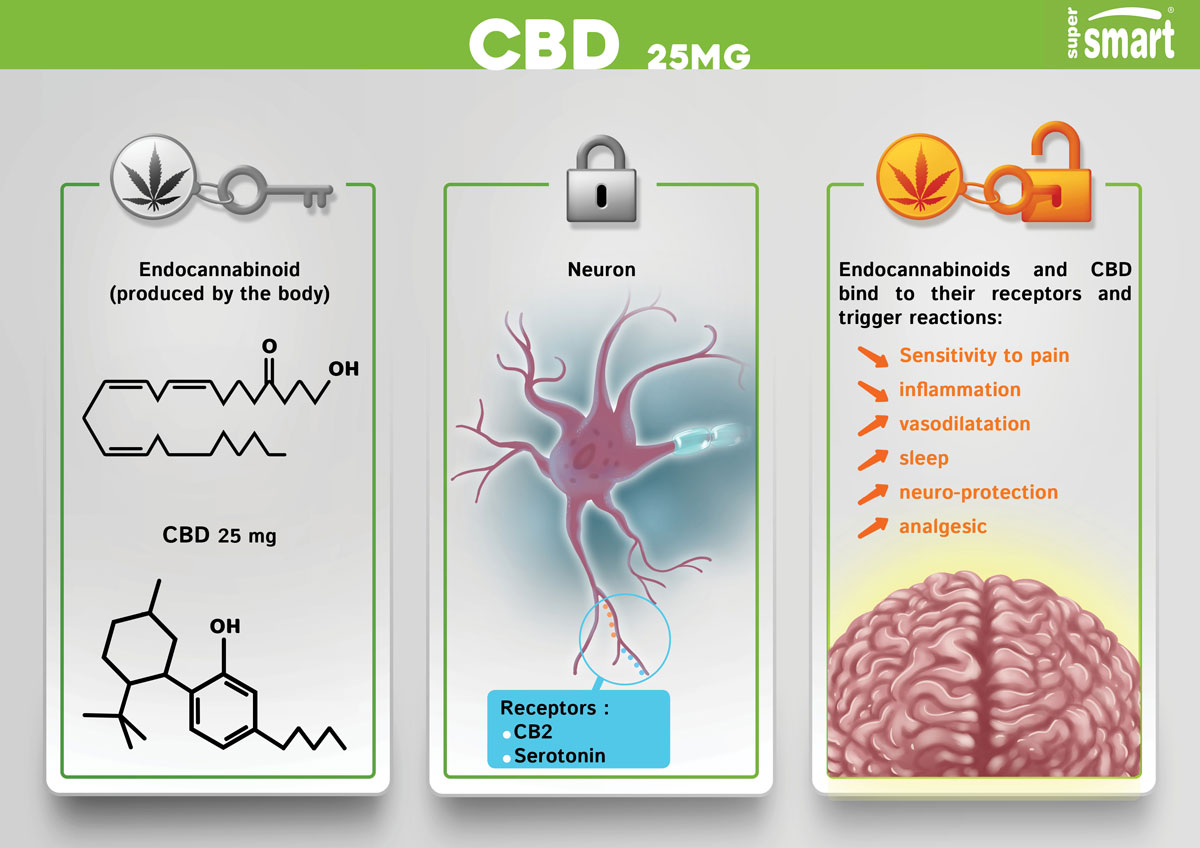 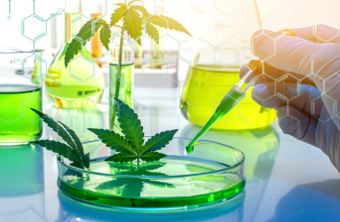 A powerful and original nutrient, CBD 25mg is emerging as an important natural painkiller: it is aimed at anyone who is exhausted by pain and the impact it has on their everyday life. It is similar to CBD Oil 6% but has a much higher concentration of active principles (25mg vs 5mg for CBD Oil), now available to buy at Supersmart.

Its main applications are for:

Cannabidiol (CBD) is a phytocannabinoid molecule found in hemp ((Cannabis sativa) alongside the well-known psychotropic substance tetrahydrocannabinol (THC). However, unlike THC, CBD does not have any narcotic properties.

It is a natural compound which mimics the action of endocannabinoid messengers produced by the body. Like them, it is able to bind to specific receptors (CB1 and CB2) located on external cell membranes, and trigger various cellular responses such as restricting synaptic transmission, relieving pain and reducing spontaneous locomotion (1). Just like endogenous cannabinoids, CBD thus inhibits the transmission of small-diameter nociceptive fibres (which are involved in the pain process) and reduces the release of neurotransmitters like substance P, responsible for transmitting pain.

Unlike THC, which has a strong affinity for CB1 receptors, CBD binds more to CB2 receptors. These are found on the surface of cells of the central nervous system and in particular in immune system tissues where they are involved in modulating memory, emotions and pain (chronic, inflammatory or neuropathic) (2-3).

What are the effects of CBD 25mg?

What are the effects of CBD 25mg on pain?

The binding of CBD to CB2 receptors, and the modulation of serotonin receptors triggers a cascade of molecular reactions, the main benefits of which are:

This depends on several factors:

For someone with a bodyweight of 70kg, and where the product is standardised to 17% CBD, the optimal dose would be 25mg, although this can be gradually increased to 50mg depending on the results obtained (though this higher dose should not be exceeded). CBD can also be vaporised but the most stable and consistent mode of administration is expertly-dosed, oral capsules.

“Over a lifetime, our body’s physiology changes, as does the number and distribution of receptors in the endocannabinoid system which are directly responsible for interactions with CBD. The optimal dose will therefore change depending on the individual and age“Nick Jikomes, PhD, neuro-physician.

How is CBD 25mg produced?

CBD 25mg is obtained by plant extraction using supercritical carbon dioxide (sCO₂). This is an alternative mode of extraction to the organochlorine solvents normally used in such processes but which are potentially harmful to the environment. Very eco-friendly, sCO₂ both ensures the final product is free from solvent residues and helps maintain the chemical integrity of the heat-sensitive molecules. It is odourless, colourless, non-toxic and non-inflammable and is completely safe for our health and our environment.

Does CBD 25mg produce any side-effects?

Unlike the drug cannabis which usually contains around 15% THC, the form used in this product has none. It therefore has no psychotropic effects and has an excellent safety profile in humans.

Once ingested, CBD is rapidly distributed around the body. It is lipophilic and thus quickly crosses the blood-brain barrier to reach brain tissues. It has no effect on heart rate, blood pressure or body temperature. CBD’s half-life is around 9 hours after which it is excreted in a metabolised form in urine.

To date, no public health problem has been associated with the nutritional use of CBD.

Composition
Directions for use
adults. Take 1 capsule a day.
This supplement contains no psychotropic substances.

the dosage is not enough for neuropathy.the price is very expansive foe this very low load
Mrs Claude Holmes 2023-01-15

InflaRelief Formula
New, more powerful and polyvalent formulation.
A holistic approach to problems of inflammation
69.00 €(75.02 US$)