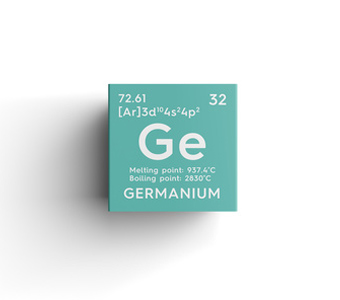 Organic Germanium Ge-132 is an organic germanium supplement typically used for its reinvigorating benefits. Naturally present in a number of foods, this trace-element has exceptional properties and is very well absorbed by the body.

What exactly is organic germanium?

Number 32 in the periodic table, germanium has the chemical symbol Ge. In its mineral form, this metalloid is found at very low levels in the Earth’s crust as well as in certain types of mineral ore.

It was first identified in 1866 in a Frieburg silver mine by German chemist Clemens Winkler, who named it ‘germanium’ after its country of origin. But it was only in the 20th century that the semi-conductor properties of the germanium mineral were discovered, opening up a new era in the field of optics, infrared, electronics and photovoltaic cells.

Far removed from these technological applications, the discovery of organic germanium followed a quite different trajectory. In 1955, Japanese professor Kazuhiko Asai became interested in medicinal plants with an age-old history of use (reishi, shiitake, Korean ginseng ...) and their germanium content. His painstaking investigations produced striking results: all displayed the particular feature of having a significant germanium content.

The scientist was quick to understand the key role this trace-element played in the growth of these plants as well as in maintaining their cellular integrity, and predicted similar effects in humans, particularly in supporting immunity.

The advent of the first organic germanium supplements

It was in 1967, when he was approaching his 60s, that Professor Asai succeeded in formulating the first water-soluble organic germanium compound, the result of protracted efforts that had involved many ‘false dawns’.

Subsequently suffering from extreme fatigue and confined to bed, he decided to risk everything by experimenting on himself with his new formula. Just 10 days later, he had apparently regained enough energy to resume his daily walk, thus also demonstrating the absence of toxicity and side-effects of his discovery.

Buoyed by this success, he immediately founded the Asai Germanium Research Institute in order to develop organic germanium supplements for therapeutic use.

What are the benefits of organic germanium?

While the mineral germanium is known to be toxic for the body, the organic germanium isolated by Professor Asai has been shown to be safe and very well tolerated in numerous studies conducted between 1970 and 1980 (1).

Several large-scale studies have provided evidence of the benefits of organic germanium supplements :

What can you do to boost your immune system naturally?

The immune system is a powerful system of defence against external pathogens (bacteria, viruses, fungi…), but unfortunately, it tends to become less effective with age. It is also weakened by chronic stress, dietary imbalance or underlying diseases.

Here are some additional tips to help boost your immune defences:

How should you take your organic germanium supplement Ge-132?

Studies conducted by the Asai Institute have shown positive effects with daily doses ranging from 100mg to 300mg of germanium, that’s 1-3 capsules of Organic Germanium Ge-132. Consult your therapist or doctor if you wish to increase your daily dose.

The best supplements to combine with Organic Germanium

Are you keen to improve your immunity by optimising the effects of your germanium supplementation?

Then make sure you have an adequate intake of vitamin C which supports good immune system function (10). Alongside a diet with plenty of fruit and vegetables, try the supplement Triple C, which contains three forms of vitamin C as well as flavonoids for maximum absorption.

Primarily produced by skin cells from exposure to the sun, vitamin D plays an important role in our natural defences by supporting good immune function, yet is often lacking in the population, especially in older people (11). With its universally-suitable dose, the formulation Vitamin D3 1000 IU can be taken by everyone.

Each vegetarian capsule contains 100 mg organic germanium (Ge-132).
Directions for use
Take 1-3 capsules a day, or more, as advised by your therapist.

Dietary supplements: what’s the best time of day to take them?