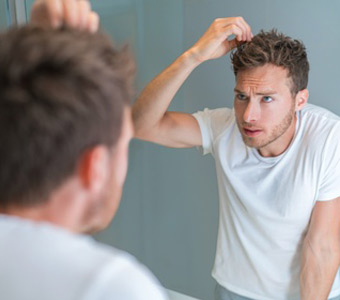 Our dietary supplement Grey Hair Formula is designed to repigment grey hair. It offers a natural alternative in vegetarian capsules to the products currently on the market which are often considered to be harmful to health. Indeed, many such options are available to buy for preventing grey hair including substitutes for melanin formation, or the administration of lead salts. In contrast to these products, we offer a natural remedy with our supplement Grey Hair Formula, the composition of which is based on natural-source elements.

What are the benefits associated with the ingredients in Grey Hair Formula?

Our formulation contains the enzyme catalase. Though catalase is naturally present in the body, a decline in its levels is associated with greying of the hair. This molecule has thus been the subject of a number of scientific studies investigating ways of countering the hair-greying process. Scientists have found that catalase declines with age, hence the tendency of hair to turn grey or white as we get older. Based on this research, Grey Hair Formula has been specially formulated to include plant-source catalase and thus offers a natural remedy for grey hair:

Our dietary supplement Grey Hair Formula also contains an extract of the plant Fallopia multiflora, formerly Polygonum multiflorum. Also known by the name of ho sho woo, or fo-ti, this plant is highly valued in Chinese medicine for restoring the hair’s natural colour. Though little-known in Europe, it has been used for many centuries in Asia; indeed, certain references claim its use dates back to around 2000 years BC. The plant owes its reputation to having been used by a Chinese emperor called Huangdi, known as the Yellow Emperor. According to ancient sources, ho sho woo, or fo-ti may have been responsible for the Emperor’s eternal youth.

Fallopia multiflora has been widely studied as a result of its potential to combat the effects of ageing. Such research has expanded scientific knowledge of some of the benefits of this traditional Chinese plant. In particular, it may help reduce deposits of lipofuscin, the pigment responsible for liver spots. Studies are still ongoing, but it also appears to have blood pressure-lowering and immune-modulating effects, essential for the body’s defences.

In addition to catalase and extract of Fallopia multiflora, our product contains other ingredients including:

Delivered in capsule form, these ingredients combine to provide a comprehensive dietary supplement for countering the hair-greying process. For optimal results, it is advisable to take a dose of three capsules a day, for a minimum of three months.

Subscribe to our newsletter
and obtain a 5% permanent discount
Our selection of articles
What are the 5 best supplements for our hair?

A perfect, glossy mane is not the sole preserve of models in conditioner adverts. In this article, you’ll find 5 dietary supplements that can help your hair shine like never before

Grey hair: the natural products that can help prevent it

Though it might be trendy among young people, for many in their thirties and forties, grey hair is definitely to be avoided. What makes hair turn grey? What natural solutions are there? Read on for the answers.

“You have beautiful nails, you know …” If this is a compliment you’ve never been paid, then perhaps it’s time to really start giving those keratinous plates at the tips of your fingers a bit more TLC. Discover 7 natural and simple tips to help you have strong, white, shiny fingernails.