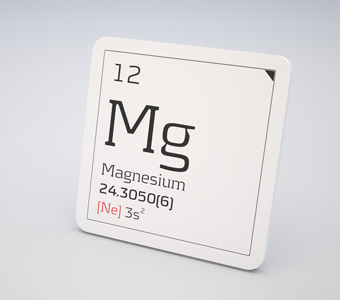 Dimagnesium malate, a patented form of magnesium, consists of one molecule of malic acid attached to two molecules of magnesium, and represents an excellent source of magnesium and malic acid, with superior bioavailability. In addition, as malate does not react with gastric acids, it does not upset the digestive system as is sometimes the case with other forms of magnesium.

What are the benefits associated with Magnesium malate?

Magnesium is found at significant levels throughout the body and is involved in a number of reactions including muscle relaxation, blood coagulation and manufacture of ATP, the body's principal energy molecule.

How does the Magnesium malate work?

In the brain, aluminium destroys the structure of neurons, causing them to starve by stripping magnesium from tubulin, a glycoprotein responsible for producing essential microtubules that provide neurons with necessary rigidity. Malic acid crosses the blood-brain barrier easily and binds to aluminium in the brain, preventing an unwelcome build-up of the metal. Furthermore, dimagnesium malate is an excellent chelator and by replacing aluminium with magnesium, it eliminates aluminium from the body, at the same time making magnesium available to neurons.

Chronic, inadequate intake of magnesium is associated with increased levels of toxic aluminium deposits, which destroy microtubules. The accumulation of aluminium in nervous tissue is believed to cause serious problems and certainly plays a not insignificant role in the development of diseases such as Alzheimer's or Parkinson's. Slight deficiencies both in magnesium and malic acid are found with fibromyalgia, a common disease which affects mainly women in their fifties. Several studies have shown that supplementing with magnesium malate relieves symptoms of the disease, with improvements in myalgia evident after just 48 hours of starting treatment. One study also showed that 1200 mg of malic acid combined with 300 mg of magnesium, taken twice a day for between 2 and 6 months, significantly improved energy levels and muscle function, and reduced pain scores in patients with fibromyalgia.

Composition
Each tablet contains 800 mg dimagnesium malate.
Directions for use
Take between one and three tablets a day with meals.
Trustpilot