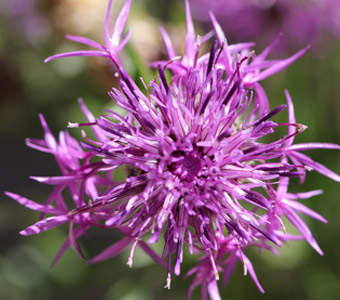 Super Harpagophytum is a dietary supplement containing devil’s claw harvested in a sustainable way by members of the Khwe community. It is standardised to 20% harpagoside, the plant’s most active compound, thus maximising the recognised effects of harpagophytum root.

Harpagophytum, also known as ‘devil’s claw’ or Windhoek root, is a plant that grows in the desert regions of South Africa, and flowers for just one day a year. Emerging at ground level, the plant’s fruit has tiny hooks that resemble claws. When sheep walk across it, these claws latch on to their hooves and coats, and in their efforts to get rid of them, the sheep jump around in a frenzy, almost as if ‘possessed’, hence its common name ‘devil’s claw’.

This plant has been used for thousands of years by the indigenous South African Bantu and Bushmen peoples, but it only began to be scientifically studied at the beginning of the 20th century. It was then brought to Europe in the early 1950s where it quickly became popular as a result of its amazing beneficial effects. Two main benefits have been well-documented so far:

The plant is also approved by ESCOP (the European Scientific Cooperative on Phytotherapy) for treating loss of appetite and dyspepsia.

What’s behind the effects of Super Harpagophytum?

Harpagophytum’s efficacy is the direct result of its nutritionally-rich composition. The plant’s side roots, from which our supplement is made, contain fatty acids, waxes, free and esterified pentacyclic triterpenes (ursanes and oleananes), free and combined sterols, flavonoids, acid-phenols, and most importantly, iridoid glycosides (harpagide, procumbide, procumboside…). These are responsible for harpagophytum’s beneficial effects, particularly harpagoside, which is why Super Harpagophytum is standardised to 20% harpagoside.

How is Super Harpagophytum extracted?

The specific way in which Super Harpagophytum is collected differs from standard harvesting techniques. Carried out by Bushmen from the Khwe community, this very delicate technique protects the main root of the plant from damage, enabling it to regenerate and the roots to re-form. Khwe harpagophytum is therefore the product of managed and sustainable cultivation.

How should you take Super Harpagophytum?

As harpagophytum works gradually, it’s advisable to take four capsules a day, two in the morning and two in the evening, for at least three months. The first effects are normally felt after around 10 days (1).

You can also make infusions using harpagophytum root itself, finely-chopped, though it is less effective for digestion and tastes very bitter. However, it is more effective for loss of appetite because the active principles act on tastebud stimulation.

Are there any side-effects associated with taking Super Harpagophytum?

Taking Super Harpagophytum for extended periods causes no adverse side effects or dependency and is very well tolerated by the body.

However, it should not be taken by women who are pregnant or breastfeeding, or by anyone taking blood-thinners as, at high doses, it could increase the effect of anticoagulant drugs. In addition, as devil’s claw may reduce blood sugar levels, diabetics should seek advice from a health professional before supplementing. There’s also an increased risk of ulcers in those on regular aspirin therapy (2).

Composition
Directions for use
adults. take 4 capsules a day. Each capsule contains 250 mg of Harpagophytum extract.