11 reviews
Customer reviews
31.00 €(31.55 US$) in stock
Description
Extract of marigold rich in lutein
Certificate of Analysis 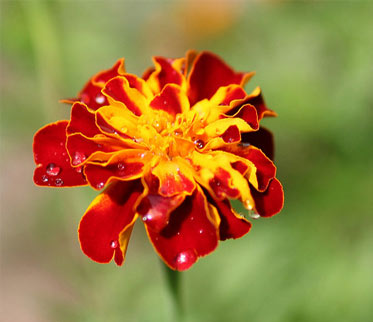 Lutein 20mg is a marigold supplement containing 20mg of lutein per capsule, which is the daily dose scientific studies consider to be most appropriate. Like Macula Plus, a formulation which also contains zeaxanthin, it helps support visual function.

What benefits are offered by marigolds?

The marigold is a plant used traditionally for its antioxidant properties and ability to support visual health. Its high content of lutein, a pigment found in the retina, is responsible for most of its benefits.

A plant species native to Mexico belonging to the Asteraceae family, it was discovered during an expedition to Africa in the 16th century by the Emperor Charles Quint, who was struck by the vividness of its colours. It is the plant’s natural richness in lutein, a carotenoid pigment with well-known antioxidant properties, which accounts for these bright hues. The marigold was traditionally used for its antioxidant and anti-inflammatory properties, as well as its ability to prevent wrinkles (1), and support visual health. This latter property is the result of its exceptionally high content of lutein. It also contains numerous bioactive compounds such as thiophenes, flavonoids and triterpenoids (2).

What exactly is lutein and what are its properties?

Lutein is one of 600 carotenoid pigments listed to date, of which around fifty are found in fruits, edible flowers and vegetables. Like zeaxanthin, it is part of the xanthophyll family. In terms of diet, lutein is found in egg yolk, green leafy vegetables (such as spinach and sorrel), yellow/orange vegetables (such as corn and carrots) and edible flowers including, of course, marigolds.

Lutein cannot be synthesised by the body so ensuring an adequate intake is very important. It acts as a shield against free radicals, particularly those generated by the sun’s ultraviolet rays. Plants themselves use the abundant xanthophylls in their leaves to modulate light energy and protect them from ‘chlorophyll triplets’, harmful excited states produced in huge amounts in the presence of elevated light levels.

The human eye, which is itself exposed to significant light levels, also contains xanthophylls: lutein, zeaxanthin and meso-zeaxanthin. Lutein and zeaxanthin are believed to be transported to the retina in the same proportions as those found in the blood. That’s why it’s important to obtain them from the diet.

Meso-zeaxanthin does not feature in the human diet but it’s thought that lutein is partly converted into meso-zeaxanthin (3-4) after ingestion, primarily in the macula, via a mechanism which seems to be less developed in young children than in adults. Lutein is present in photoreceptor cells, in the rod outer segments responsible for detecting light radiation, but also, to a lesser extent, in the brain, skin and adipose tissue.

What are the best dietary sources of lutein?

The foods richest in lutein are primarily dark green vegetables, the kind that are increasingly passed over these days in favour of ultra-processed food. Lutein intake is therefore now significantly lower among Western populations.

Astaxanthin is a natural reddish-pink coloured pigment which belongs to the same carotenoid family as lutein. It is produced by several types of microalgae consumed by zooplankton, and in turn consumed by the latter’s predators: pink flamingos, salmon, shrimps (hence their pink colour). It’s a pigment that complements lutein perfectly.

Who is the supplement Lutein 20mg aimed at?

Marigold extract, standardised to 25% lutein, is aimed at anyone keen to ensure long term visual acuity and good eye health in general. No side-effects have been reported to date in those taking lutein supplements.

Note : this product should not be used to replace a varied, balanced diet or healthy lifestyle. Follow the advice on use, the recommended daily dose and the use-by date. Not recommended for women who are pregnant or breastfeeding, or for children under 15. Keep out of young children’s reach. Store in a cool, dry place. .
Crédit Image : SinusVision

Composition
Directions for use
Take one capsule a day with a meal.