8 reviews
Customer reviews
22.00 €(24.69 US$) in stock
Description
Affron Eye® is an extract of saffron standardised to 3% crocin.
Certificate of Analysis 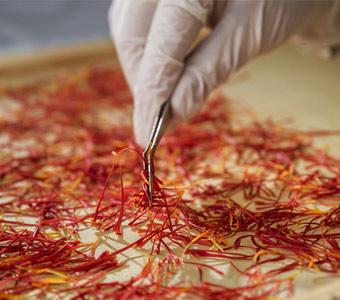 Affron Eye® is an extract of saffron stigma with benefits for eye health, delivered in vegetarian capsules.

What is Affron Eye®?

Affron Eye® is formulated from an extract of saffron obtained from the crocus flower known scientifically as Crocus sativus. Though saffron is familiar as a culinary spice, used in dishes across the world for thousands of years, its therapeutic properties are less well-known. Yet traditional Ayurvedic and Persian systems of medicine have long featured Crocus sativus for its exceptional composition and health-beneficial properties, attributes which have been confirmed in numerous studies on the plant.

In recent years, scientists have succeeded in isolating extracts with a high content of active substances. Such research has also led to the formulation of our new supplement based on a saffron extract. Our new dietary supplement is formulated from a high-quality saffron extract standardised to 3% crocin. Affron Eye® is available in capsule form, with a suggested dose of two capsules a day. It can, if necessary, be taken alongside our formulation Macula Plus, also available to buy at Supersmart.

What benefits are associated with Affron Eye®?

Alongside its flavour-giving properties, saffron has an unusually complex composition, with more than 100 compounds discovered so far, including active principles such as carotenoids. Known for their antioxidant potency, these compounds are natural orange, yellow and red pigments and are indeed responsible for saffron's orange-red colour. Apart from these antioxidants, saffron is also comprised of safranal. Primarily responsible for the spice's distinctive smell, this molecule is also used as an active principle in a number of therapeutic preparations.

May have benefits for AMD

With its high antioxidant activity, saffron extract may also offer protection against Age-related Macular Degeneration or AMD, one of the most common eye diseases.

This silent, painless disease is characterised by a gradual deterioration of the central part of the retina which ceases to function correctly. It is a major cause of loss of vision, primarily among the over-60s, potentially leading to complete blindness. AMD sufferers find it increasingly difficult to carry out daily functions such as reading or driving.

This is why new preventive ways of combatting retinal deterioration have been developed. One such product is our dietary supplement Affron Eye® which fights the oxidative stress and free radical damage responsible for cellular ageing.

Subscribe to our newsletter
and obtain a 5% permanent discount
Our selection of articles
How can you protect your eyes from blue light?

7 tips to help restore or improve your hearing naturally

Modern lifestyles tend to encourage eye fatigue. Yet scant attention is paid to ways of maintaining the health of this fragile organ for as long as possible. Read on to discover natural solutions to safeguarding your sight.