Price summary
Total price of the offer
86.00 €
Add to basket 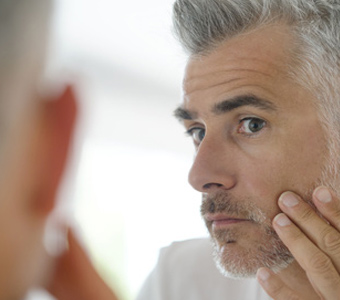 Catalase supplement, an enzyme present in most living organisms and the subject of numerous scientific studies in recent years, has a significant anti-ageing effect, primarily helping to prevent hair from turning grey prematurely.

Catalase's efficacy may be linked to its very specific chemical composition. It is, in fact, a large protein formed from four identical chains of amino acids, each chain containing an atom of iron called a haem. This specific structure means that catalase can produce almost 200,000 catalytic reactions per second. It is thus considered one of the most active enzymes. The iron atom is also able to break the oxygen-oxygen bond in hydrogen peroxide, a molecule harmful to healthy body function. This chemical reaction means that catalase reduces the accumulation of hydrogen peroxide in the body. Scientists have thus attributed catalase with protective effects that combat cellular ageing.

On the basis of the many discoveries made about catalase, our supplement aims to counteract the signs of ageing naturally, simply and effectively. It has been designed to combat the premature cellular ageing which may be responsible for a number of health problems. Supplementing with catalase may also help prevent the appearance of grey hair. With all these anti-ageing benefits, our supplement Catalase should form an integral part of any anti-ageing regime.

What are the benefits associated with Catalase?

What do studies say about catalase?

Some studies suggest that premature greying of the hair could be linked to a decline in catalase levels. Absence of this enzyme may enable hydrogen peroxide's damaging effects to produce grey hairs. Hydrogen peroxide interferes with melanin, one of the main pigments in hair. By gradually destroying melanin, it leads to depigmentation, a process responsible for the appearance of grey and white hair.

A number of scientists have investigated catalase supplementation as a way of preventing this process. Increasing catalase intake means the enzyme is able to reprise its protective role and, by dividing the hydrogen peroxide in two and thus blocking its activity, prevent the destruction of melanin. In combatting hydrogen peroxide's oxidative damage, catalase is able to limit, slow down and even reverse the process whereby hair turns grey prematurely.

A high-quality product, our anti-ageing supplement is produced in the form of capsules, each one containing 250mg of catalase, equivalent to 6250 units of catalase activity. With this level of catalase, two capsules a day is the recommended dose, though this can be adapted to your needs and the advice of your therapist. To preserve the product's efficacy, it should be stored in a cool, dry place away from direct sunlight. Other anti-ageing supplements of interest that protect the body from premature ageing are also available to buy at Supersmart such as Longevity Nutrients, DNA Repair and AMPK Booster.

Composition
Directions for use
Adults. Take 2 capsules a day.
Each vegetarian capsule contains 250mg catalase, ie 6250 units of catalase activity (CatU).
Store at temperature between 2 and 8 ° C in a dry place away from light.