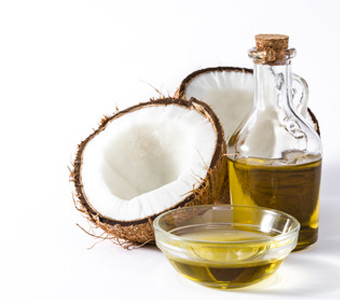 Caprylic Acid is a dietary supplement containing caprylic acid dosed at 450mg per capsule. It’s a good source of medium-chain fatty acids(MCT), nutrients which, with the growing popularity of the ketogenic diet and the increase in disorders caused by the yeast Candida, are the subject of numerous studies.

What is caprylic acid?

Caprylic (or octanoic) acid is a medium-chain fatty acid (MCT) found in human breast milk and some animal milks (the only animal source), in certain plant oils such as coconut oil (6%-10% of its fatty acids are caprylic acid), and certain seeds.

Mildly acidic (pH of 4.9), it enters bacterial cells through passive diffusion and affects their ability to thrive(1).

What other specific features does caprylic acid have?

They can serve as a source of energy for the brain.
The brain represents just 2% of adult bodyweight, but consumes around 22% of the body’s oxygen, primarily in order to support aerobic oxidation of glucose, a significant source of energy for cells. In a healthy adult, around 97% of the brain’s energy needs are met by sugar (glucose), and less than 3% by ketones (4). But in a fasting situation or ketosis induced by a low carbohydrate diet, the body converts medium-chain fatty acids into ketones, which are then used as a source of energy by the brain.

What is the Candida albicans yeast?

Yeasts from the Candida genus are fungi that are naturally present in the digestive tract, oral cavity and reproductive system. Normally, they are not pathogenic because they are kept in check by the balance that exists between the microbiota’s various microorganisms (5). However, when this balance is upset, they can become formidable pathogens, capable of infiltrating various tissues and organs (6). They are said to be ‘opportunistic’. Candida albicans and Candida glabrata yeasts are the most common opportunistic microorganisms in the human body (7).

Who is most at risk from fungal disorders?

How should you take Caprylic Acid and how can you maximise its effects?

We recommend taking between one and three capsules a day at mealtimes, with a large glass of water.

Sodium caprylate is very well tolerated by the digestive system and reports of side-effects are very rare (mild nausea or heartburn which quickly disappears).

Other measures you can take alongside your caprylic acid supplementation include:

Composition
Directions for use
Adults. Take 1 to 3 vegetarian capsules a day with meals. Each capsule contains 450mg of caprylic acid.