1 reviews
Customer reviews
29.00 €(31.54 US$) in stock
Description
A mushroom that stimulates immunity and combats deviant cells
Certificate of Analysis

Price summary
Total price of the offer
109.00 €
Add to basket 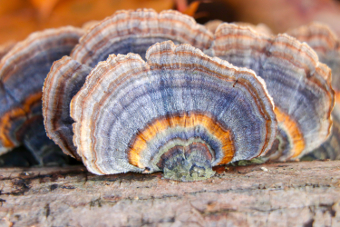 Though it remains little-known in the West, it is a popular remedy in traditional Chinese and Japanese medicine. It is also used in modern Asian medicine, particularly alongside anti-cancer treatments.

It is the mushroom’s content of the complex carbohydrates polysaccharides and numerous phenolic compounds which are responsible for its considerable efficacy.

What is Trametes versicolor?

Turkey Tail, or to give its scientific name, Trametes versicolor, is a lignivore mushroom which means it feeds on wood. It usually grows on the trunks of deciduous trees like beeches and birches, in a wide variety of places and in many different climates.

Its common name Turkey Tail comes from its upright shape and graded shades of brown reminiscent of a wild turkey’s tail fan. It is also known as Coriolus versicolor, kawaratake (‘beside-the-river mushroom’ in Japanese) and yun-zhi (‘cloud mushroom’ in Chinese).

A mushroom rich in PSP and PSK polysaccharides

Turkey tail’s powerful immunostimulant, anti-infectious and anti-tumour effects are due to its many nutrients (1-2). In particular, it has a wide range of polysaccharides. These natural carbohydrates, formed from many smaller simple sugars or monosaccharides, are known for their numerous health benefits.

What benefits does the supplement Organic Turkey Tail offer?

It helps improve the immune response

The polysaccharides in the mushroom Trametes versicolor are known to be effective at activating immune cells. (6) These compounds, referred to as ‘biological response modifiers’, also act by improving the expression of cytokines and chemokines (7-8).

Turkey Tail also acts directly against various aggressors such as viruses and bacteria. One study noted its potential as an anti-influenza and anti-herpes agent, and even attributed it with a ‘high therapeutic index’. (9)

This mushroom is also useful in fighting multiple bacteria (10). Let’s not forget that antibiotics, the drugs prescribed for eliminating or limiting bacteria, are themselves often extracts of medicinal fungi.

The polysaccharide-peptides in Trametes versicolor are, amongst others, able to eliminate harmful gut bacteria and thus play a genuine prebiotic role in the body. (11-12) This ability to regulate intestinal microbiota further contributes to this mushroom’s immunomodulatory power. (13)

A mushroom with recognised anti-tumour properties

In Asia, turkey tail is regularly used as a preventive substance and adjunct treatment for several types of cancer. (14-16) A Chinese study of more than 4000 subjects observed positive effects on overall survival and quality of life of cancer patients. (17)

Taking Turkey Tail may significantly increase patient survival, particularly in those with breast, stomach or colon cancer undergoing chemotherapy. (18-19). This mushroom also has recognised therapeutic potential for cervical, uterine and pancreatic cancer as well as leukaemia and malignant lymphoma. (20-21)

Meanwhile, an American study examining the anti-cancer properties of Trametes versicolor found its polysaccharide components to offer benefits as an adjuvant cancer therapy, as part of an overall treatment and secondary prevention strategy. (22)

Turkey tail’s anti-tumour properties are due to several factors:

Lastly, Organic Turkey Tail also helps to combat oxidative stress. As we know, this oxidation process unleashes a flood of free radicals in the body, which result in cellular ageing and can lead to chronic inflammation. Turkey tail, a potent antioxidant, counteracts this damage. (29)

This mushroom is in fact a rich natural source of antioxidants, containing numerous phenolic compounds: one study revealed that the phenol-acids in an aqueous extract of turkey tail helped to, amongst others, inhibit DPPH and OH free radicals, as well as acetylcholinesterase (AchE). (30) Among the other phenolic compounds found in Turkey Tail are flavonoids, the well-known and highly effective antioxidants (31-32), not forgetting its high content of terpenoids or terpenes, another family of antioxidant metabolites. (33-34)

Finally, the results of a 2015 study suggest that extract of Trametes versicolor may also have anti-genotoxic properties – in other words, its components may be able to directly protect a cell’s genome. (35)

As a precaution, we recommend that anyone suffering from an auto-immune disease, or who is either awaiting or has undergone an organ transplant should not supplement with turkey tail.

In addition, anyone suffering from cancer should first consult their doctor to make sure that taking this supplement is compatible with their ongoing anti-cancer treatment.

If you’d like to benefit from other pro-immunity medicinal mushroom supplements available to buy at Supersmart, we’d draw your attention to one of our great classics: AHCC (Active Hexose Correlated Compound), a powerful immunostimulant extract of shiitake.

For a broader range of mushrooms, we’d recommend Organic MycoComplex. This supplement contains no fewer than 7 different mushrooms (reishi, chaga, cordyceps, etc.) It too provides valuable support in stimulating your immune system, as well as relieving fatigue.

The immunostimulant power of colostrum

Still on the subject of immunity, we couldn’t possibly end without mentioning colostrum. This natural substance is the first form of mother’s milk and is incredibly rich in antibodies and essential nutrients. You can benefit from its many properties by starting a course of Colostrum supplements.

And if you’re particularly interested in combatting deviant cells, we recommend combining Organic Turkey Tail supplementation with Saikosaponin A. Saikosaponin A is an anti-viral and anti-cancer substance derived from the herbaceous plant Bupleurum falcatum. A number of studies suggest it helps to prevent tumours and encourage their regression. (36-37)

Composition
Directions for use
Adults. Take 2 tablets a day.

Organic Aloe Vera
Relieves the digestive system without irritating
29.00 €(31.54 US$)