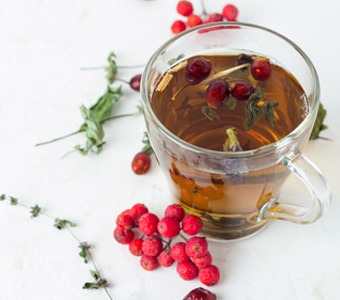 Schisandra Chinensis is a supplement containing extract of schisandra berry, a powerful adaptogen which helps to normalise liver and respiratory function. It is standardisesd to 9% schisandrin, the plant’s most important active compound.

What is Schisandra chinensis?

Schisandra chinensis is a woody vine measuring up to 8 metres in length, known for thousands of years in China, Korea and Russia, where it grows naturally (1).

Registered on list A of medicinal plants in the French pharmacopeia, it bears small red berries which are traditionally used in Chinese medicine for their adaptogenic properties.

What is an adaptogen plant?

Dr Nicolai Lazarev defined an adaptogen plant as one containing substances that increase the body’s non-specific resistance and ability to adapt to stress To qualify as ‘adaptogen’, a plant must:

Adaptogen plants differ from stimulant plants such as tea, yerba mate and guarana in that they do not trigger excessive release of catecholamines into the neuronal synapses and bloodstream. They help to durably increase the body’s resistance without draining it of its resources or producing undesirable effects, such as withdrawal syndrome. In sportspeople, they do not disrupt cycles of sleep, recovery, and cell component synthesis, and therefore constitute a long term solution.

What’s behind the effects of Schisandra berries?

The benefits offered by schisandra berries are the result of their high content of:

It is the lignans, specifically schisandrin B, which are responsible for its liver-protective effects(2) and ability to optimise respiratory function (3). That’s why our supplement is standardised to 9% schisandrin.

With regard to its adaptogenic activity, certain of its pharmacological substances (such as triterpene saponosides) help to stimulate the adrenal cortex region (without producing any mineralocorticoid or anabolic effects), and regulate the hypothalamic-pituitary adrenal (HPA) axis.

Are there any side-effects associated with Schisandra chinensis supplementation?

One study showed a possible interaction between schisandra supplements and drugs sensitive to cytochrome P450, such as tacrolimus, an immunosuppressant used in dermatology. In addition, schisandra chinensis is not recommended for women who are pregnant or breastfeeding (4).

Apart from these instances, schisandra supplementation does not cause any significant long-term side-effects.

In TCM, this plant is considered to be astringent, the berries having both a sweet and sour taste and being warm in nature. It is thought to benefit the lung and kidney meridians.

Though schisandra is traditionally used in decoctions (3g-6g) or herbal teas (1g-3g of concentrated powder), our supplement offers maximum potency and efficacy because it is standardised in schisandrin, the plant’s most active ingredient.

It can be combined with other adaptogen plants and dietary supplements:

Composition
Each vegetarian capsule contains 250 mg 10:1 Schisandra chinensis.
Directions for use
Take between one and three, or as advised by your therapist.

Lung Detox
Essential formulation to aid respiration and detoxification of the lungs
33.00 €(35.43 US$)

Subscribe to our newsletter
and obtain a 5% permanent discount
Our selection of articles
Which supplement should you take if you’re allergic to pollen?