4 reviews
Customer reviews
62.00 €(67.41 US$) in stock
Description
Red Propolis is the rarest, wildest and most effective type of propolis
Certificate of Analysis 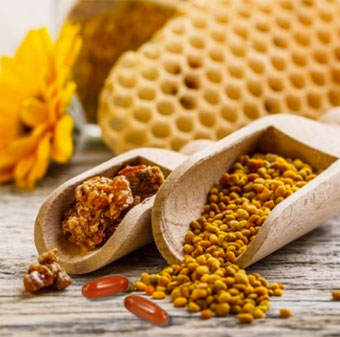 It’s a good idea to also take the following steps throughout your supplementation with red propolis capsules, for increased benefits:

For synergistic effects, its possible to combine Red Propolis with other supplements available to buy at Supersmart, such as those of barberry extract, a powerful anti-bacterial which also helps lower blood sugar levels, zinc orotate, which has well-documented preventive effects against the common cold, vitamin C, invaluable in winter for boosting white cell numbers, and a medicinal mushroom complex enriched with ginseng and selenium.

Composition
Directions for use
adults. Take 2 capsules a day.
Each capsule contains 400 mg of extract standardised to 20% red propolis and 7% flavonoids.