6 reviews
Customer reviews
31.00 €(32.33 US$) in stock
Description
Ginseng extract standardised to 30% ginsenosides, with benefits for overall health and well-being.
Certificate of Analysis 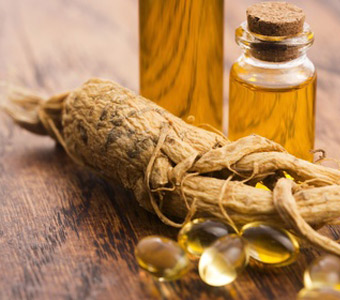 Ginseng has been used for centuries in traditional Eastern medicine to replenish and restore the body's natural reserves as well as to support sexual health. Its Latin name ‘Panax' actually means ‘panacea'. Korean ginseng , like schisandra, is known in the West as an “adaptogen” rather than a ”stimulant”: in a general, non-specific way, these herbs increase the body's resistance to various sources of stress (physical, chemical or biological) and to stressful situations.

With its high ginsenoside concentration, this Panax ginseng extract therefore acts on a number of parameters of overall health and well-being. Supplementation is recommended several times a year for periods of three weeks to a month, at a dose of two to four capsules a day.

Supplements to take in conjunction with Ginseng 30%

Taking Panax ginseng can be alternated with other dietary supplements available to buy at Supersmart that support the body's general well-being. Extract of Cordyceps sinensis, for example, is a fungus renowned in Asia for its revitalising effects. You can also benefit from the positive effects of pyrroloquinoline quinone (PQQ) in the supplement Mitochondrial Formula.

Composition
Directions for use
Adults. Take 2 to 4 capsules a day.
Each capsule contains 500 mg of Ginseng extract.
Seek advice from your therapist if you are taking anticoagulants (risk of decreased INR), MAOIs (risk of insomnia and headaches) or hypoglycaemic medication (risk of hypoglycaemia).

Asc2P
A stable and potent form of vitamin C that can penetrate cells, and that maintains telomere length
37.00 €(38.59 US$)

Smart Pills
An exceptional formulation for stimulating the brain (nootropic)
35.00 €(36.50 US$)

Subscribe to our newsletter
and obtain a 5% permanent discount
Our selection of articles
Which supplement should you take if you’re allergic to pollen?