Supplement containing naringin, one of the most powerful bioflavonoids in pomelo 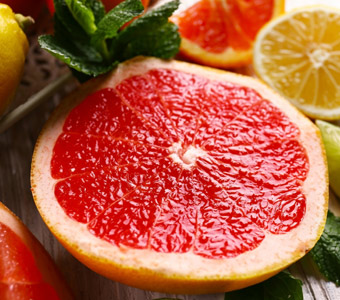 Grapefruit Extract is a supplement containing naringin produced naturally from pomelos (Citrus paradisi). Guaranteed free from synthetic ingredients, the supplement is produced by extracting from all the parts of the pomelo – the pulp, seeds, and skin.

Each capsule provides around 300mg of naringin, equivalent, on average, to 30g of dried grapefruit peel.

Naringin is the citrus flavonoid responsible for the typically tart taste of grapefruit and bitter orange (1). Also called 7-beta-neohesperidoside, it was first discovered in 1857 by De Vry in the flowers of Java pomelo (2).

There is up to 500mg in a litre of mechanically-pressed grapefruit juice (as the pressure exerted on the fruit is stronger when a mechanical juicer is used, the juice comes into contact with the peel and membranes which are very rich in naringin, thus increasing its concentration).
However, obtaining stable levels of naringin is difficult as its concentration varies depending on how ripe the pomelo is (the riper the fruit, the less naringin there is), how it is processed (the elements responsible for the bitterness are often removed) and the conditions in which the fruit is grown.

The advantage of Grapefruit Extract is that each capsule contains the same amount of naringin – a real plus when, for example, a doctor wants to improve the way a particular drug is metabolised in a patient with absorption problems.

What are pomelo’s benefits for health?

The pomelo (Citrus paradisi) is a fruit mainly consumed in the West, but which is incorrectly known as grapefruit. It is the result of crossing a bitter orange with an actual grapefruit (Citrus maxima).

It contains compounds which inhibit certain proteins, particularly those which affect drug metabolism. As a consequence, drugs are able to stay in the body for longer, generally increasing their effects.

As for pomelo extracts, they support the body’s microbiological balance(helping to maintain plasma vitamin E levels and cholesterol balance, etc.).

How should Grapefruit Extract be taken?

You may also be interested in some other bioflavonoid-based supplements:

Do pomelo supplements cause any side-effects?

Because of their richness in naringin and coumarins, pomelo supplements can interfere with certain medicines (3), and Grapefruit Extract is no exception.

The drugs in question and potential side-effects include:

In general, this supplement is not recommended unless supervised by a health professional for those taking medication, women who are pregnant or breastfeeding, children or obese individuals (4). There are actually a number of drugs which should not be taken at the same time as grapefruit.

Composition
Directions for use
adults. Take two capsules a day.
Each capsule contains 300mg of grapefruit extract standardised to 99% naringin.