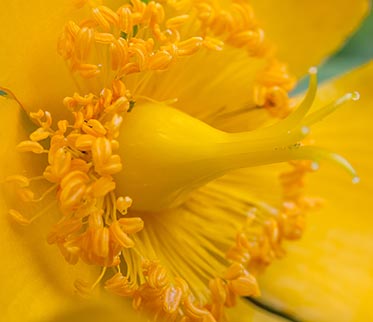 St John's Wort Extract is a supplement containing St John’s Wort, aimed at treating mood disorders (1). It’s a natural anti-depressant approved by the WHO for combatting inner restlessness and anxiety, and which helps to alleviate sleep problems. Its content of hypericin, the plant’s main active principle, has been standardised to enhance its efficacy.

What exactly is St John’s Wort?

St John’s Wort is a plant rich in phenolic compounds (caffeic and chlorogenic acids, tannin, rutin, hyperoside, quercetol (2)). However, its effects on mood are generally attributed to naphtodianthrones, particularly hypericin, a pigment responsible for the colour of the oil released from the blackish dot-like glands on the plant’s flowers and leaves.

St John’s Wort’s mechanism of action is not yet fully understood. We know that its bioactive constituents include flavonoids, procyanidins, hyperforin and hypericin, and that it works via a different mechanism to that of normal anti-depressants.

The serotonergic, noradrenergic and dopaminergic systems and gamma-aminobutyric acid (GABA) pathways, may all be involved in the action of St John’s Wort. It has been shown in studies to inhibit synaptic reuptake of serotonin, dopamine and norepinephrine (3), as well as to have a significant affinity for adenosine, GABA and glutamate receptors. There seems to be a synergistic effect between hyperforin, hypericin (4) and various flavonoids (5) in the reuptake of neurotransmitters and adrenergic and serotonergic receptor density (6).

St John’s Wort may also be involved in regulating genes that control the function of the hypothalamic-pituitary axis.

What are the effects of St John’s Wort? And how much should you take?

Researchers have shown St John’s Wort to be as effective at ‘chasing away the blues’ naturally as anti-depressants (7-8) in a meta-analysis of 29 clinical trials (involving close to 6000 subjects) (9). Participants in these trials received between 500mg and 1200mg of St John’s Wort containing 0.2% hypericin, for between 4 and 8 weeks (10) (that’s 2-3 capsules of St John's Wort Extract).

The hypericin in St John’s Wort also has sedative properties (11). It may help to reduce the physical symptoms of withdrawal and induce vasodilatory effects.

Its use for reducing anxiety and depression (resulting from nervous fatigue, overwork, stress, etc.) is recognised by ESCOP, Commission E and the WHO.

How should St John's Wort Extract be taken?

St John’s Wort supplements are produced from the dried flowering tops. According to the author of one study, positive effects only start to be felt after 10-15 days’ use, like any antidepressant.

Anyone taking oral anticoagulants should avoid St John’s Wort because of its enzyme-inducing effect. The same applies to those on anticonvulsant drugs, progestogen contraceptives, immune-suppressants, and inhibitors of protease or tyrosine kinase. If you are in any doubt, it is best to consult a health professional before taking it.

People with very fair skin who want to benefit from St John’s Wort should avoid intense exposure to the sun’s ultraviolet rays because of the risk of phototoxicity.

This product should not be used to replace a varied, balanced diet or healthy lifestyle. Respect the advice on use, the recommended daily dose and the use-by date. Not recommended for women who are pregnant or breastfeeding, or for children under 15. Keep out of young children’s reach. Store in a cool, dry place.

Composition
Each capsule contains 300 mg of St. John's Wort extract standardized to contain 0,3% of Hypericin.
Directions for use
Take 3 capsules per day (1 with each meal): This dosage is the one used in the studies mentioned below. To obtain the best results, you must take St. John's Wort for at least 4 to 6 weeks.

Subscribe to our newsletter
and obtain a 5% permanent discount
Our selection of articles
Benefits of GABA: video testimonial from a fitness champion