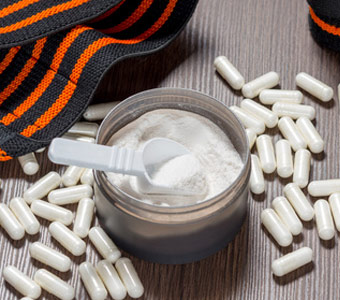 BCAA's is a supplement containing branched-chain amino acids which is very popular with sports enthusiasts. It contains 3 essential amino acids not produced by the body - L-leucine, L-isoleucine and L-valine – in a 2:1:1 ratio that corresponds to their distribution in the make-up of proteins.

What are branched-chain amino acids (BCAAs)?

Branched-chain amino acids are essential amino acids (which means they have to be obtained from the diet) that have an aliphatic side chain. They form part of the composition of proteins and constitute a source of energy by contributing, in particular, to the Krebs cycle. These three amino acids represent more than 30% of the amino acids that make up muscles. Their concentration in plasma diminishes following intensive exercise (1-3).

On this basis, a daily dose of our BCAA’s supplement would easily cover the needs of a sportsman weighing 100 kg.

What roles do proteins play in the body?

Proteins – which are made up of amino acids – have two main functions in the body:

According to the scientific literature, at least 1.2g/kg of protein a day is required in order to maintain muscle mass. To gain muscle mass, however, the figure is higher, with most publications agreeing that 1.5/kg to 2.2/kg is the optimum range for building muscle without any risk to health.

Amounts such as these are often difficult to achieve without taking a supplement, especially if you want to avoid gaining body fat at the same time. What’s more, eating large amounts of certain high-protein foods – red meat for example - is not good for health (4).

Supplementing with amino acids offers an alternative to taking proteins: even though they are only monomers of proteins, they are absorbed much more rapidly by the body.

How are proteins synthesised?

Dietary intake of proteins (which are broken down into amino acids during digestion) and of amino acids enables free amino acids to circulate in the body, in cells and in the extracellular milieu. These free amino acids are then used as ‘building blocks’ to construct new proteins in the body. This is a continuous process as cellular and plasma proteins are constantly renewed throughout life.

This process uses a huge amount of energy: around 0.85 kcal per gram of protein synthesised.

How should the supplement BCAA’s be taken?

The recommended dose is two scoops a day, as required, just before or after exercise.

The following supplements can also be taken in conjunction with BCAA’s:

When we exercise, carbohydrates are metabolised in order to provide the energy we need. If blood sugar levels are too low, the body will draw on its muscle reserves. It’s therefore a good idea to consume carbohydrates with a high glycaemic index (GI) (glucose or maltose for example) just before or during exercise to reduce any loss of glycogen. When at rest, however, you should opt for low GI carbs to encourage production of glycogen to restore muscle reserves.

Composition
Each scoop contains 5 g of BCAA
Directions for use
Take 2 scoops a day, as required, before or after physical exercise.