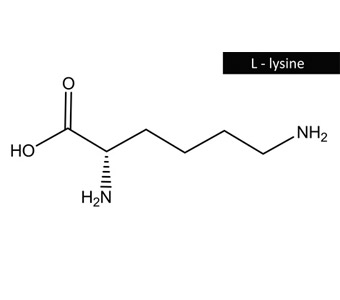 L-Lysine is a supplement containing lysine in its levorotatory isomeric form, the only form the body really needs. It is one of the most important essential amino acids for human health.

What exactly is lysine?

L-Lysine (the symbol of which is Lys or K) is an amino acid which the body cannot produce but which is nonetheless essential to health. Like all amino acids, L-lysine has two functional groups, an amine group (NH2) and a carboxyl one (COOH). It is ketogenic only, meaning it is converted solely into ketone bodies (not glucose). It is found in the diet, particularly in grains and pulses.

L-Lysine is able to cross the blood-brain barrier and reach a part of the brain where it is metabolised into α-aminoadipic acid, which can interact with a number of neuroreceptors (1).

What is an essential amino acid?

There are eight essential amino acids: isoleucine, leucine, lysine, methionine, phenylalanine, threonine, tryptophan and valine. They’re termed ‘essential’ because they cannot be produced by the body but are nonetheless crucial for good health. Lysine and threonine are without doubt the most important (2).

The only way of meeting our needs for them is through diet and supplementation.

What are the risks posed by a lack of lysine?

Inadequate lysine intake can adversely affect norepinephrine activity in the hypothalamus, a structure of the central nervous system. It can induce symptoms of protein deficiency, such as a decrease in the body’s overall resistance and problems with growth.

What are our daily requirements for lysine?

The minimum amount recommended for adults is 30mg/kg, that’s 2700mg for someone weighing 90 kilos. Each vegetarian capsule of our supplement delivers 500mg of L-lysine. We therefore recommend taking between 6 and 12 capsules a day as required, or as advised by your therapist.

Good dietary sources of lysine are high-protein foods such as eggs, meat, beans, peas, cheese and certain fish such as sardines and mackerel. The amount of lysine per gram of protein is also important: foods with a lysine content of less than 5% per gram of protein are not considered good sources. These include chocolate, whole wheat, white flour, peanuts, soya and wheatgerm.

Can supplementing with lysine cause any side-effects?

Taking L-lysine is considered safe. It has been used as a dietary supplement for several decades, with no evidence of side-effects, including at high doses (4).

However, you should not supplement with lysine at the same time as arginine as they compete with each other in the body. Similarly, lysine supplementation is not recommended if you are taking aminoglycoside antibiotics.

It is, however, possible to combine lysine with other amino acid or protein supplements, namely:

Composition
Each vegetarian capsule contains 500 mg of L-lysine
Directions for use
Take 6 to 12 capsules a day, as required, or as advised by your therapist.