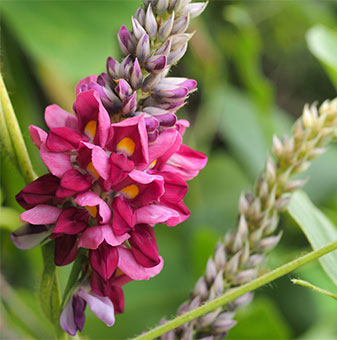 The root and flowers of kudzu have been used in traditional Chinese Medicine for over 2,500 years to treat various disorders, including:

What do studies say about Kudzu?

During a trip to China, David Lee, a chemist, observed that many people drank a tea containing kudzu. It's Chinese name can be loosely translated as dispeller of 'drunkenness'. This tea is often used in northern China to sober up after drinking alcohol and to ease hangover symptoms.

In 1991, Dr Lee collaborated with researchers at the Chinese University of Shin-Yanget to test the effects of a kudzu tea on laboratory rats which had been given alcohol. The motor co-ordination of the animals improved and they appeared less intoxicated. Another study showed that kudzu lowered alcohol consumption in rats selectively bred to crave alcohol. Further experiments suggest that the animals did not appear to develop a dependence on kudzu.

Another study conducted on heavy drinkers showed that kudzu reduced the amount of alcohol that they absorbed. These results have recently been confirmed, suggesting that kudzu extract could represent a natural, beneficial adjuvant treatment for reducing alcohol consumption. Some of the components in kudzu root - flavonoids such as puerarin, daidzin, and daidzein - also help to reduce the damage caused by excessive alcohol consumption.