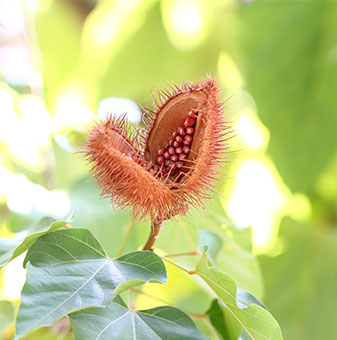 Our dietary supplement Annatto Tocotrienols is formulated from an extract of Bixa orellana. Also known as roucou, urucum and achiote, this shrub grows in tropical regions of the Americas, where its spiky red fruits are recognised for their health benefits. Known as annattos, these seed-filled fruits have been used for many years in traditional medicine, where they are recommended for treating insect bites or for protecting against the sun's rays.

In actual fact, Bixa Orellana fruits offer considerably more benefits. They are rich in carotenoids such as beta-carotene, a powerful natural antioxidant, and contain a number of trace elements including selenium, magnesium and calcium. They also have a high content of a specific form of vitamin E called tocotrienols. Formulated from the fruit of Bixa Orellana, our dietary supplement thus offers a natural vitamin E concentrate.

What are the benefits associated to Annatto Tocotrienols?

Given its essential role in the body, vitamin E must be ingested from the diet in sufficient amounts. While it is present in plant-source foods such as vegetable oils and nuts, intake can nonetheless fall short of optimum levels. In fact, there is not just one form of vitamin E but eight distinct forms, which are grouped into tocopherols and tocotrienols. There are fewer dietary sources of tocotrienols which is why our supplement Annatto Tocotrienols has been formulated from natural tocotrienols extracted from the fruit of Bixa orellana. This formulation offers 90% delta-tocotrienols and 10% gamma-tocotrienols.

Like all vitamins, vitamin E has a number of roles within the body. It also has many properties in common with other vitamins, such as natural antioxidant power, which it shares with its well-known counterpart vitamin C. This antioxidant potency helps to:

What does research show about Annatto Tocotrienols?

Despite the many studies conducted on tocotrienols, their mechanism of action within the body has yet to be fully explained. Research suggests, however, that these forms of natural vitamin E may offer significant therapeutic potential. Indeed, scientists believe that tocotrienols may:

Our nutritional supplement Annatto Tocotrienols has been developed to both reduce the risk of vitamin E deficiency and capitalise on the benefits of this molecule. It offers significant therapeutic potential for preventing and treating certain diseases. In order to create a high quality supplement, Annatto Tocotrienols has been formulated from natural extracts and is produced in the form of softgels. Each capsule contains 100mg of annatto extract (Bixa Orellana) standardised to 50% tocotrienols. This formula means the recommended dose is 2 capsules a day, to be taken with dinner. In addition to these natural tocotrienols, you can also find other forms of vitamin E in our product Gamma E Tocopherols.

Composition
Each softgel contains 50 mg annatto tocotrienols.
Directions for use
Take two capsules a day with your evening meal.