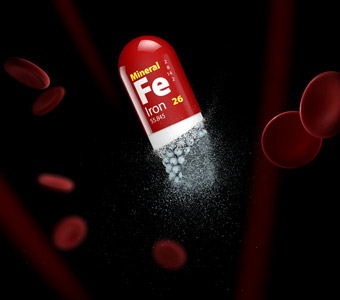 Iron Bisglycinate is formulated from a specific form of iron – iron reacted with glycine to form a chelate called ferrous bisglycinate. This has the advantage of being an anti-fatigue form of iron with excellent bioavailability due to its low molecular weight. It is thus easily absorbed by the gut, making it bioavailable within the body. In addition, ferrous bisglycinate is a stable form of iron. Having no ion charge, it does not interact with other nutrients in the digestive system and is therefore well-absorbed by the body.

What are the benefits associated with Iron Bisglycinate supplement?

Our dietary supplement Iron Bisglycinate offers a simple way of increasing your iron intake. The body needs iron in order to function properly. This trace element participates in a number of mechanisms of action including the formation of new cells, hormones and neurotransmitters.

Iron also plays an essential role in enabling red blood cells to transport oxygen from the respiratory system to the body's tissues. This is why a lack of iron can be damaging to our health and why supplementation is sometimes necessary - particularly since serious iron deficiency can impair cognitive development and cause iron deficiency anaemia - a condition in which a lack of iron results in a reduction in red blood cells leading to poor oxygenation of the body.

Why is iron supplementation important?

Iron deficiency has been a significant public health issue for several years. The World Health Organisation (WHO) estimates that 1.3 billion people suffer from iron deficiency anaemia. Of the many potential causes, the most common is inadequate intake, or poor absorption, of dietary iron. The body does not produce iron and it must therefore be provided by the diet:

The ferrous bisglycinate used in our supplement is a safer, more effective form than either ferrous sulphate, iron citrate or iron D-gluconate, all of which can produce side-effects such as gastric problems. Studies on ferrous bisglycinate, on the other hand, have revealed no negative side-effects on the stomach wall or intestines. The benefits of this type of iron are now available as dietary supplements in the form of 25g capsules, with a suggested dose of three capsules a day for optimal iron intake.

Composition
Directions for use
Adults. Take one capsule, one to three times a day, or as advised by your therapist.
Each capsule contains 25mg of iron bisglycinate.
Trustpilot