3 reviews
Customer reviews
42.00 €(47.14 US$) in stock
Description
Wild Amazonian Formula is an exceptional formula from the Amazon that develops the body’s natural ability to self-heal 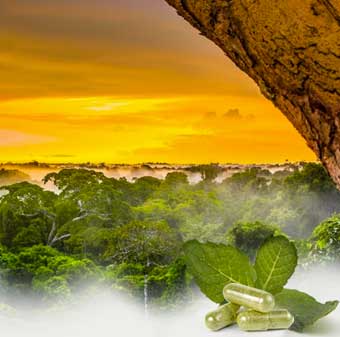 Wild Amazonian Formula is a clever mix of five wild plants from the Amazon designed to stimulate the immune system and develop the body’s ability to self-heal. Each of these medicinal plants has been carefully selected for its immune-stimulant and anti-proliferative properties. They are all hand-picked from the open-air botanical garden that is the Amazon rainforest.

Who is Wild Amazonian Formula aimed at?

This exceptional formulation is primarily for people aged over 50. These individuals’ immune systems are generally weaker and slower to respond to infections and abnormal cellular events than those of younger people.

It is equally suitable for people whose health has been compromised by adverse factors such as diabetes, cardiovascular problems, chronic stress or chemotherapy, as well as anyone who wants to minimise their risk of all kinds of infection.

In short, these are the four benefits offered by our formula:

What is in Wild Amazonian Formula?

The Amazon rainforest is an extraordinary source of rare plant species which possess amazing therapeutic properties. SuperSmart has carefully selected the best of them to produce an unprecedented synergistic formula. Three criteria have been applied in making our selection: the plants’ empirical use, their clear, scientifically demonstrated physiological effects, and their synergistic power.

What effects can you expect to see from taking Wild Amazonian Formula?

The natural plant extracts in Wild Amazonian Formula are well-known to tribes of the Amazon rainforest, particularly the Ashaninka and Campo who believe they affect both mind and body. They have been used in Amazonia for thousands of years. Given that traditional medicine rarely ‘gets it wrong’, thousands of researchers have endeavoured to scientifically test the virtues attributed to these plants. With a certain amount of success: the anti-inflammatory, immune-stimulant and anti-proliferative properties of these plants have indeed been demonstrated and explained in a laboratory setting.

Well-managed combination of these plants can help ward off infections and relieve problems often held in check by conventional medicine. It can, above all, help to stimulate the immune system through several distinct mechanisms:

How should you take Amazonian Formula capsules? Are there any contraindications?

Wild Amazonian Formula is not recommended for those suffering from auto-immune diseases because in these individuals, stimulating the immune system threatens, rather than protects, the body. In addition, some of the plants used, particularly mullaca, can produce a mild hypotensive and anti-coagulant effect.

To optimise supplementation, it’s advisable to follow the recommendations below:

Wild Amazonian Formula can be combined with other supplements available to buy at Supersmart such as Reishi extract or Adaptix to maximise its effects on immunity, or with Nicotinamide Mononucleotide 125 mg to add powerful anti-ageing effects.

To prevent winter infections, it’s best to begin a six-month course of supplementation in the autumn. In all other cases, it can be continued for longer.

Composition
Directions for use
Adults. Take 2 capsules twice a day.

Spirulina
Natural extract of Spirulina, a superfood of exceptional quality
27.00 €(30.31 US$)

Adaptix
Eight different adaptogens to combat the effects of stress and boost physical and mental vitality
27.00 €(30.31 US$)

Subscribe to our newsletter
and obtain a 5% permanent discount
Our selection of articles
Traditional Russian medicine: principles and key substances

Less well-known than Chinese or Ayurvedic medicine, traditional Russian medicine is nonetheless just as popular with Russian citizens. Discover the well-kept secrets of its natural remedies.

‘Superfoods’ are natural, health-beneficial foods with a high nutritional value. Which are the 7 best superfoods offering benefits validated by the European Food Safety Authority?

The top 3 supplements of the Olympic volleyball champion