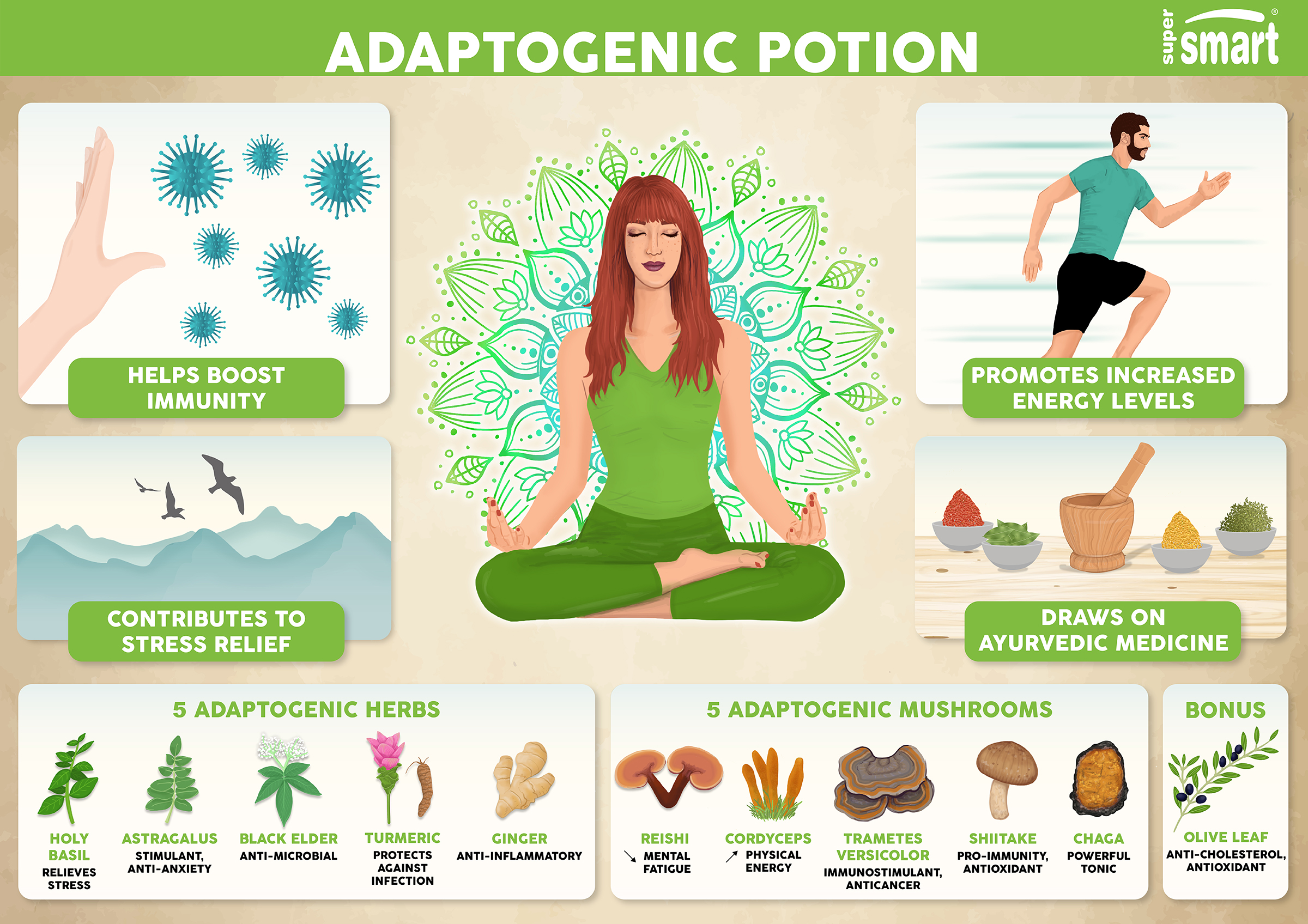 3 reviews
Customer reviews
35.10 €39.00 €(38.16 US$)
-10%*
Today in stock
*Offer can be combined with your loyalty discount
Best if used before 07/30/2024
Description
Ayurvedic potion to boost immunity and relieve stress
Certificate of Analysis 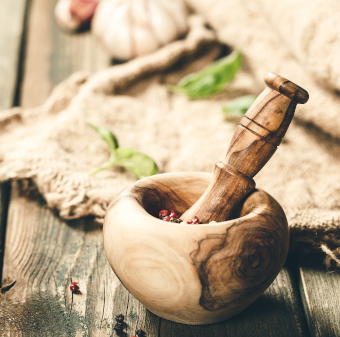 Adaptogenic Potion is a dietary supplement based on the tradition of Ayurveda. It comprises 10 herbs and mushrooms that are ‘adaptogenic’, in other words, they help the body adapt to various forms of stress. Astragalus, black elderberry, turmeric, reishi... With recognised benefits, all these natural, high-quality compounds act synergistically to improve immunity, stamina and concentration. They also help to increase your energy levels and relieve tension.

Yogis, the grand Masters of Yoga and Ayurveda (traditional Hindu medicine), have always prepared energising and therapeutic beverages. For example, there’s ‘golden milk’, a blend of milk, turmeric and ginger which is still very popular with yoga aficionados, amongst many others. Adaptogenic Potion draws on the best of this age-old tradition to deliver a formulation that’s even more concentrated in active principles, providing numerous benefits for health.

Adaptogens, the best of Ayurvedic medicine

True to the main principles of Ayurveda, the supplement Adaptogenic Potion contains an excellent selection of adaptogenic compounds. As we know, these pharmacological substances are recognised for regulating many of the body’s functions, increasing vitality, reducing stress and promoting good overall health.

Effects that work against metabolic disorders and promote immunity

Let’s first look at the effects delivered by adaptogens in general. According to a 2017 study, adaptogens as a whole offer “versatile beneficial effects against chronic inflammation, atherosclerosis, neurodegenerative cognitive problems, metabolic disorders, cancer and other age-related diseases” (1).

In addition, some of these metabolic regulators help boost the immune defences. (2) (3). These include reishi, cordyceps and shiitake, three well-known mushrooms selected for this formulation.

Adaptogenic Potion also boosts your resistance to all forms of stress: emotional (related to work or personal life …), biological (the constant fight against infections ...), oxidative (caused by free radicals), chemical (the presence of endocrine disruptors and other environmental pollutants), etc. (4) (5) (6) (7)

In fact, adaptogens work by regulating the nervous, neuroendocrine and non-specific immune systems(8).

In particular, these compounds have antioxidant properties. They therefore help to combat free radicals, the reactive molecules that undermine healthy cell function and accelerate the ageing process. (9) (10)

As well as increasing the body’s overall resistance, the adaptogens in Adaptogenic Potion have been shown to be effective at improving performance, reducing both physical and mental fatigue and relieving anxiety. (11) Unlike coffee, these compounds are able to energise the body without over-stimulating it, and even produce a soothing effect.

Scientific studies suggest that adaptogens’ calming properties are due to their ability to regulate homeostasis and control key mediators of the stress response (especially via an effect on the stress-induced protein Hsp70). (12) (13)

Are you looking for a natural source of energy and stressbuster? Taking Adaptogenic Potion will give your body a boost in terms of improved health, strength, vitality and serenity.

The synergistic effects of 10 high-quality herbs and mushrooms

This unique formulation delivers the best of:

The supplement Adaptogenic Potion contains 5 extracts of adaptogenic herbs and 5 of mushrooms, all carefully hand-picked, and at doses designed to work synergistically in the body.

Holy basil, also known as Ocimum tenuiflorum or tulsi, is referred to in Ayurveda as the ‘Queen of Herbs’. It has been shown to be useful for treating various forms of stress, overcoming feelings of exhaustion, relieving depression and improving memory. This ‘Queen of Herbs’ also has an antimicrobial effect. (14) (15) (16) (17)

Astragalus is a medicinal plant which has been used for thousands of years. Adaptogenic and particularly invigorating, astragalus offers immunomodulatory, antioxidant, anti-cancer, energising and stimulating benefits. Various studies have shown that it helps combat fatigue, stress and anxiety. This perennial herb can also help you top energy. (18) (19) (20) (21) (22) (23) (24) (25)

Adaptogenic Potion also contains extract of black elderberry, or Sambucus nigra. The flowers, berries and leaves of this shrub have been used therapeutically for centuries in Europe and what was Asia Minor. Black elderberry, which has antiviral and antimicrobial properties, provides excellent support against colds and flu. (26) (27)

With its distinctive yellow-orange colour, the adaptogen Curcuma longa is native to India and south-east Asia. It’s one of the key spices used to make curries. This important Ayurvedic plant is recognised as having antioxidant, anti-inflammatory and anti-infectious properties which are believed to be related to its main polyphenolic pigment: curcumin. (28) (29)

Also used for hundreds of years in traditional Hindu medicine, ginger is recognised as an adaptogen with powerful antioxidant, anti-inflammatory and anti-tumour effects. Some studies have suggested it may also help reduce cholesterol levels and improve lipid metabolism. Taking a ginger extract supplement will optimise your intake of gingerols, shogaol and other paradols, the key substances in ginger. (30) (31) (32) (33)

The 5 adaptogenic mushrooms in Adaptogenic Potion

Indigenous to Asia, this adaptogenic mushroom (also called Ganoderma lucidum) was for a long time reserved only for Japanese and Chinese emperors and dignitaries. We now know that reishi is able to boost the immune system. Indeed, it helps increase production of B and T lymphocytes and macrophages. It also helps relieve fatigue. (34) (35) (36) (37)

A mushroom that grows in the mountainous region of the Himalayas, cordyceps has been used for more than 3000 years in traditional Asian medicine. A number of studies have demonstrated its efficacy at increasing physical energy, stimulating sexual function and improving liver, kidney and lung health. (38) (39) (40)

Less well-known,Trametes versicolor, or Coriolus versicolor, is nonetheless an invaluable ally for maintaining good health, with several studies having confirmed its immunostimulant properties. This adaptogenic mushroom is used, amongst others, as an adjuvant treatment for certain types of cancer. (41) (42) (43) (44) (45)

Shiitake, or black mushroom, has been cultivated for millennia. Rich in antimicrobial compounds (such as lentinan, lenthionine and oxalic acid) which enable it to survive in its natural environment, shiitake is known for stimulating the immune system. It is used in Asia, for example, as an adjunct to chemotherapy. Shiitake also contains phenolic compounds with significant antioxidant potency. (46) (47) (48)

This adaptogenic mushroom was used as a tonic by nomadic peoples of the Siberian taiga who consumed it in the form of a tea. We now know that chaga’s polysaccharides boost the body by triggering the release of interferon and interleukin immune cells. (49) (50)

Who is this supplement aimed at?

Adaptogenic Potion provides invaluable support for anyone who:

How should Adaptogenic Potion be taken?

Try to adopt a healthier lifestyle

To boost your immune defences, reduce stress and increase your energy levels, you can enhance the effects of Adaptogenic Potion by taking a few simple steps:

Supplements to combine with adaptogens

To further enhance your body’s resistance to stress of any kind, Adaptogenic Potion can be combined with other high-quality products available to buy at Supersmart such as:

Adults. Take 2 droppers in the morning and 2 in the evening.

It is an impotant remedy for people, who easily catch colds. Sambucus ( Elder) shortens a cold due to it is antiviral properties and it is used for this purpose for decades, Ginger support it, and the other ingredients support the Immunesystem. It also lessens the symptoms of a flue or cold.
Kerstin Kleine 2021-09-11

Green Propolis
Natural antibiotic with an incredible range of biological activities
53.00 €(57.62 US$)